Our family loves to get out and hike, camp, off-road, bike–pretty much anything as long as it’s outside. We really enjoy hiking because it’s something we can do with the dogs. It’s great for them; it’s great for us.

We recently discovered gjhikes.com, and it’s a treasure trove of information on trails in Colorado, Utah, Arizona, and New Mexico. There is an amazing amount of trails listed for the Western Colorado region. I had no idea we lived so close to so many. Most are less than a thirty minute drive away from us.

Yesterday we explored the first part of Dominguez Canyon, starting at the Bridgeport trail head. The first part of the trail is dreadful. You follow the train tracks for quite some time before you reach the bridge to cross the Gunnison River. Once on the other side, the trail is beautiful. 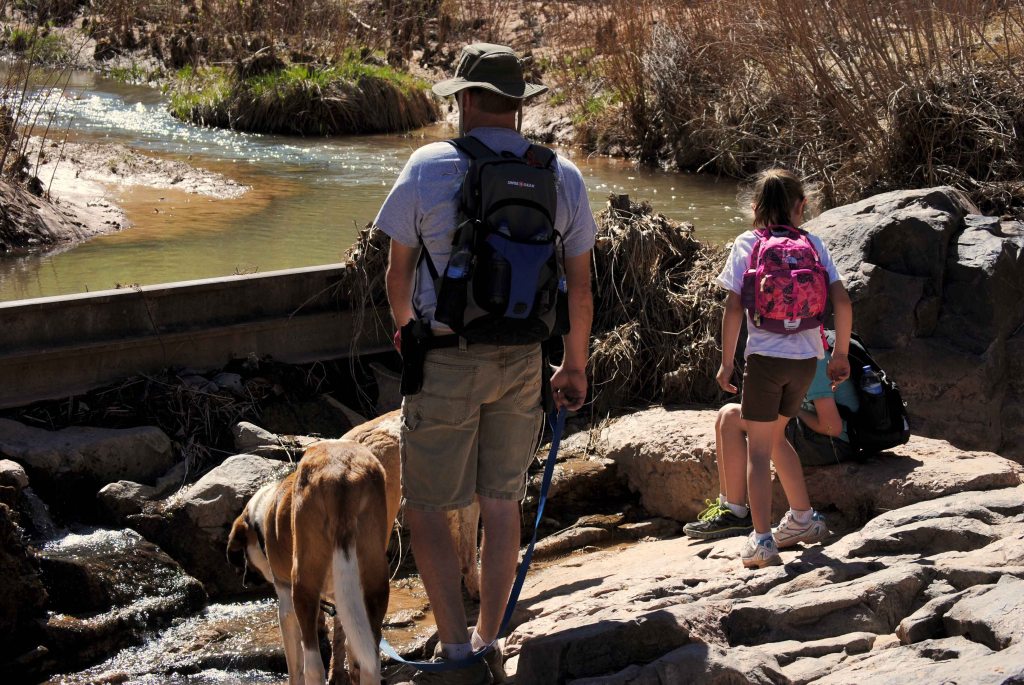 We stopped for an early lunch, and then we continued on. I assume many rafters use this area, because there are signs directly by the river explaining the conditions for camping. Of course, backpackers camp too, but it’s the placement of the signs I found interesting.

We wanted to find the petroglyphs that are supposed to dot the area, but we only made it just past the waterfall before my daughter ran out of steam. She was done. Done. It’s a good thing we turned around. By the time we made it back to the car, both kids were exhausted (and more than a little grumpy).

Last night on Pinterest I found a great tip to pack some suckers or other little candies as rewards along the way. We will probably give this a try next time.

If you want to explore the area, I suggest you go early. Even in late March this trail was hot. If you have dogs with you, beware that this is a popular area for horseback riders. Our dogs didn’t mind at all. In fact, Gunther thought they were the most delightful things, especially when one allowed him to touch noses. I wish I had gotten a picture of that, but he’d never been in direct contact with a horse, and I wasn’t sure how he would react.

We’ll definitely try this area again, but next time we might camp one or two nights and give the kids chance to recharge and explore a little more.

This site uses Akismet to reduce spam. Learn how your comment data is processed.

I am a participant in the Amazon Services LLC Associates Program, an affiliate advertising program designed to provide a means for me to earn fees by linking to Amazon.com and affiliated sites.

Forged in Cursed Flames releases tomorrow!
We’re getting close to the release of Forged in Cursed Flames, which means it was time for the preorder for Fall of the Ember Throne to go up! Here’s a little sneak peek at the cover!
I pretty much ditched the last day of the conference to go explore. (I’m going to the evening event tonight, so I’m not a complete slacker.)
My yearly selfie. 😂
We’re in Florida! Yesterday morning, I wasn’t sure we’d make our flight. On the barely ten-minute drive from the hotel to the airport, someone ran into the shuttle. We ended up running through DIA to make it to the gate. (Well, as much as you can run through security. 😂)
We’re getting ready to leave for an author conference in Florida. (I am SO excited, you guys. Some of my favorite people are going to be there, and we’re going to hang out on the beach!) 🏖☀️🌊
Loading Comments...
%d bloggers like this: